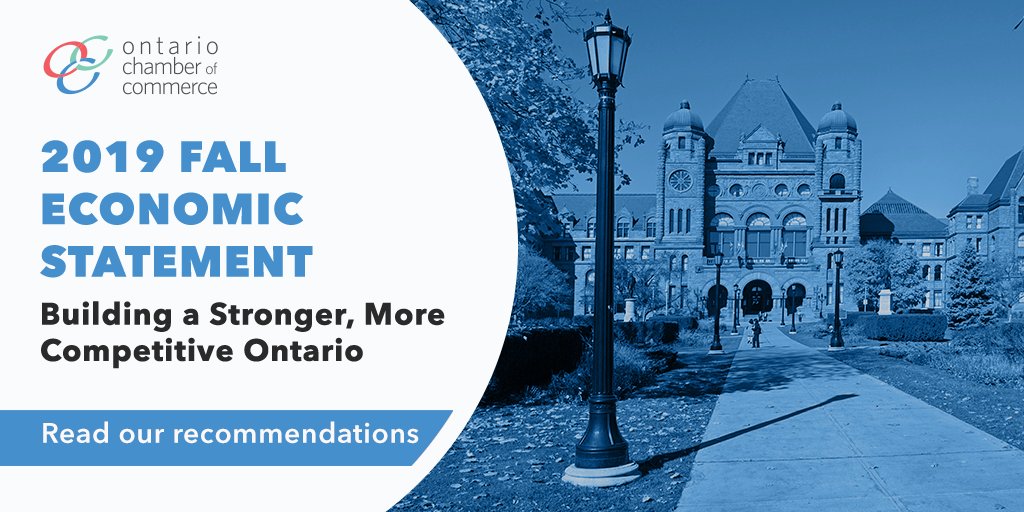 On November 6, the Government of Ontario released its 2019 Fall Economic Statement entitled, “2019 Ontario Economic Outlook and Fiscal Review: A Plan to Build Ontario Together,” which provides an update on the government’s finances and announces commitments for the upcoming 2020 Budget.

OCC Response:
We would have preferred to see a revenue-neutral restructuring of the Small Business Deduction (SBD) to encourage scaling up of small businesses. This would provide businesses with the right incentives while avoiding a loss in government revenues. The OCC and Ontario Chamber Network look forward to participating in the consultations as the government works to develop and “Ontario Small Business Success Strategy.”

OCC response:
The OCC looks forward to participating in these consultations with government. The OCC has also asked for a Forestry Strategy. We are pleased to see movement on supporting innovation and competitiveness in this industry.

The OCC supports measures to improve access to capital for businesses in rural regions. In The Great Mosaic: Reviving Ontario’s Regional Economies, we recommend introducing a Rural Investment Tax Credit (RITC). The OCC supports efforts to encourage immigrants to live and work in rural and Northern communities, adding more skilled workers to communities where they are needed most.

The OCC and the Ontario Chamber Network look forward to participating in the government’s consultations with rural stakeholders to address economic development challenges and opportunities.

OCC response:
Between 2014 and 2016, Ontario’s aviation fuel tax increased by nearly 150 percent, making it the highest in Canada. This acts as a financial barrier to many of Ontario’s attractions, particularly in northern and remote communities, where other forms of travel may be infeasible for visitors. While this announcement is a good first step, the OCC would like to see the aviation fuel tax in all communities be lowered to match other Canadian provinces.

OCC response:
The OCC applauds this decision. An assessment of climate change impacts will enable the province to take meaningful steps to protect Ontarians and the economy.

OCC response:
As recommended in our recreational cannabis report, Supporting Ontario’s Budding Cannabis Industry, the OCC supports this decision as it offers a consumer-friendly option to purchase legal cannabis, allows retailers to better serve customers, and will help combat the illegal market.

OCC Response:
The OCC applauds this decision given that contraband takes away revenue from the Province, Ontario accounts for the lion’s share of contraband tobacco in Canada, and the profits are used to fund organized crime. The OCC is undertaking a comprehensive report on the tobacco and vaping industries and looks forward to providing the Province with analysis in December 2019.

The government plans to:

OCC Response:
In our beverage alcohol report, Refreshing the Sale of Beverage Alcohol in Ontario, the OCC undertook a comprehensive analysis on the tax issues facing all four categories – wine, beer, cider, and spirits. While the OCC is pleased that the government will introduce legislation that, if passed, would pause wine and beer tax increases, we encourage them to take a comprehensive approach to reforms. Neglecting to consider taxation as it pertains to cider and spirits would serve to reinforce inequities between producers in Ontario.

The OCC would have liked to have seen new announcements in the following areas: